You are here: Home1 / Blog2 / Marketing3 / Are Tweets the Ticket to the Super Bowl?

Even as a Seattle fan, it got a little boring watching the Broncos continually hand the ball over. After feeling pretty confident the Seahawks were bringing it home, I wound up perusing through Twitter.

It seemed like JCPenney was having as rough a first half of the game as the Broncos. 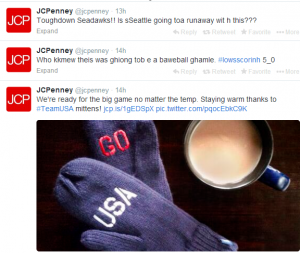 The company sent out two tweets that appeared to be written under the influence of a few too many super bowl cocktails. However, afterwards, they send out a tweet with a picture of their new mittens, apologizing for the typos.

Was this a planned publicity stunt or a well-handled blunder?

Judging by the prepared image that was sent out after the fact, I would have to guess that this was fully planned. However, the huge response couldn’t have been planned. Twitter users across the board were re-tweeting the messages, making jokes about the brand being too inebriated to have a Twitter account.

However, possibly even better handled was Snickers. Whoever is in charge of their Twitter account made a perfectly executed reply, shown in the image below. 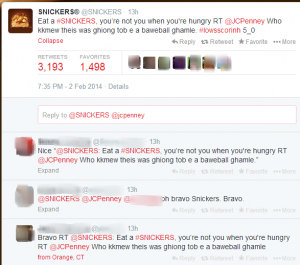 Snickers wasn’t the only one who jumped on board and offered J.C. Penney help with their tweeting problem. 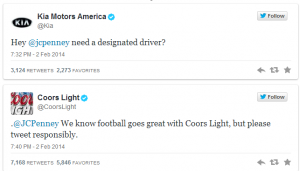 The interesting part? None of the brands that were part of the Twitter conversation were advertisers in the Super Bowl.

With a 30 second commercial costing $4 million, it’s no surprise a lot of brands decided against the splurge in advertising this year, but it seems a lot of them have taken to social media. Rather than spending millions on short, highly competitive air space, there seemed to be more happening on social media.

It also felt like every commercial was trying to start its own hashtag.

It makes me wonder what the future of Super Bowl advertisements will look like, and whether or not companies that do decide to spend the money on these advertisements are getting their money’s worth.

While on Twitter, I didn’t see any #StayRestless conversations, or #VW for the Volkswagen commercial, yet there were thousands of shares for the brands that stuck to the Twitterverse. While Jeep’s tweet with the hashtag they paid millions of dollars for with their commercial got 15 retweets and 23 favorites, the reply Snickers sent out about JCPenney’s tweet alone got 3,193 retweets and 1,489 favorites.

It will be interesting to see in the next few years whether the classic Super Bowl commercials will stay the course or if Twitter or Facebook stunts like J.C. Penney’s will take over the main stage.

3 Things Entrepreneurs Should Fear in 2014

The Habits of Every Successful Salesperson
Scroll to top