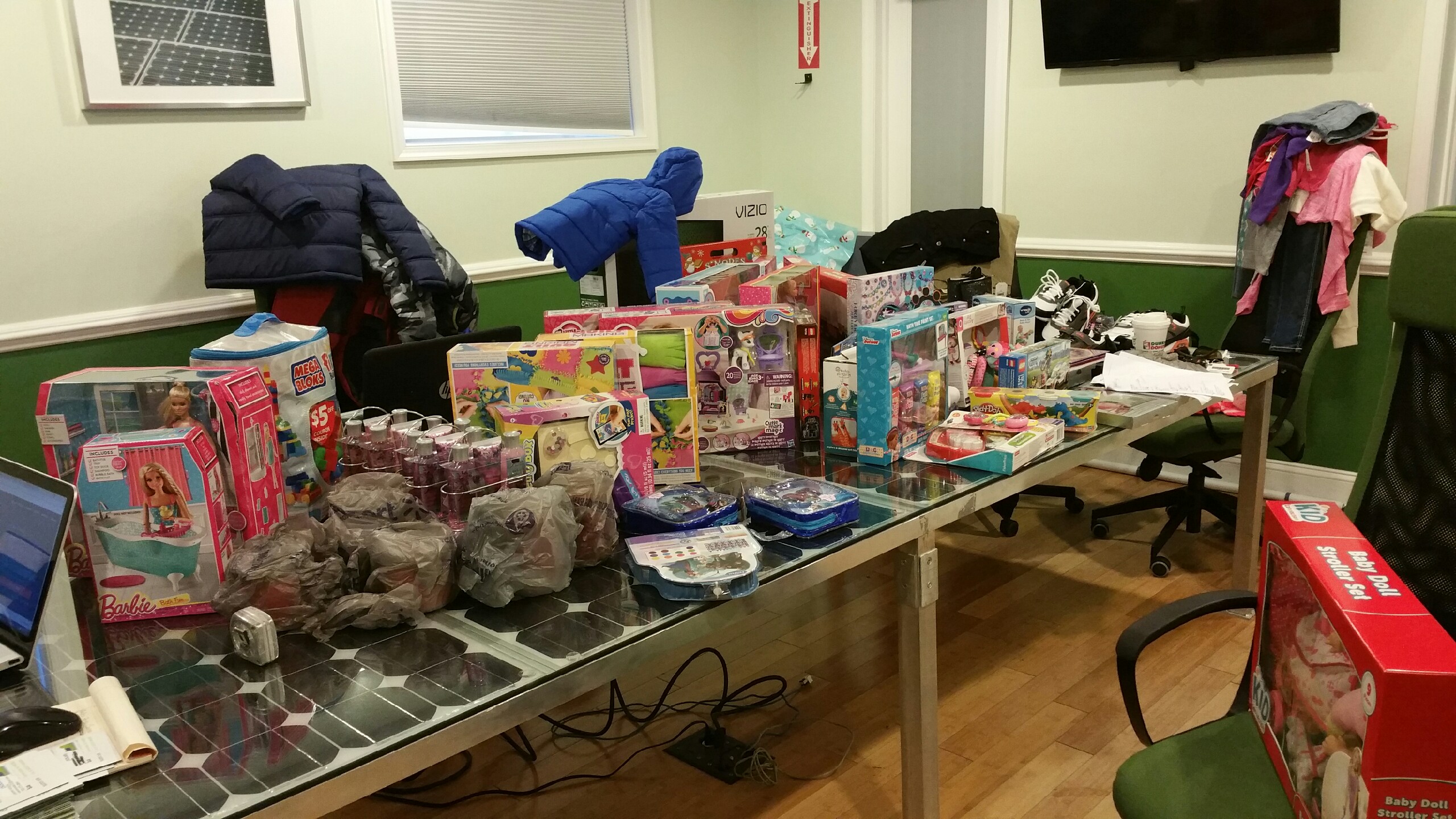 In total, Santa’s Helpers aimed to support seventy children and their families during the 2015 holiday season. Santa’s Helpers’ Executive Director, Kathleen Mader, said: “Without the support of Code Green Solar and Orpical Group, we wouldn’t even be close to reaching our goals this year. They took on a huge portion of the list. When their gifts were dropped off, the families were very appreciative. Many of the parents even cried tears of joy and have stated that they will be returning cards and photos of the families to the companies to express their gratitude.”

Teams at both Code Green and Orpical Group were provided the children’s “Wish Lists” and had the opportunity to choose which gifts they wanted to buy. Santa’s Helpers then collected and dropped off the gifts to the families’ surprise. Gifts included essentials such as winter coats, shoes, and cosmetic and hygiene kits. Holiday-inspired gifts including candles, a Christmas tree with all trimmings, and three meals were also delivered. The children enjoyed unwrapping dozens of toys including Barbie dolls, Legos, arts and crafts, other assorted games, and even a flat screen television.

“We are fortunate to work with great people at Code Green Solar,” said Edward DuCoin, CEO, Orpical Group. “The opportunity to get involved with their State-incentivized Solar Savings Program provided us with the positive outlook to take progressive action. Code Green motivated us and helped us coin the idea that renewable energy doesn’t necessarily have to be about just installing solar. On a much larger scale, renewable energy is about replenishing energy, or liveliness. Getting involved in the local community and giving back was a way for all of us to harness renewable energy beyond the grid.”

Charles Kartsaklis, President/CEO, Code Green Solar, added: “Code Green Solar not only provides individuals the opportunity to cut utility costs through sustainable solar energy, we strive to make a difference in our community with programs like Santa’s Helpers. I’d like to thank Ed DuCoin and his team at Orpical Group for joining us on this amazing journey.”

Code Green Solar, founded by Charles Kartsaklis, Master Electrician, is devoted to providing state-of-the-art residential and commercial solar systems. Based in Somerdale, New Jersey, Code Green solar is a preferred installation partner of Sunnova, which provides financing programs for homeowners, where they can install solar starting at $0 down. To learn more about Code Green Solar, their recent involvement with Santa’s Helpers, or to schedule a free solar consultation, please visit www.codegreensolar.com.

Orpical Group is a full-service marketing agency based in South Jersey specializing in web design, branding, creative strategy, operations and sales. Since 2012, Orpical Group has helped clients realize and sustain high levels of individual and organizational performance. To learn more about Orpical Group and their recent involvement with Santa’s Helpers, please email info@orpical.com.